There is a great story by Dostoevsky called "The Crocodile." It is a longish short story of four chapters. It has been coming to mind recently. It especially comes to mind at conferences. It allows me to laugh at others and also keeps me humble whenever someone refers to me as an expert on anything. This is one of Dostoevsky's extremely rare funny stories. In the story, Ivan Matievich decides to go to the Arcade with his wife to see the crocodile that is on exhibit. He winds up teasing the crocodile and getting swallowed whole. A big farce ensues when his wife tries to figure out how to get him out - Who does she go to? Who has the authority over the crocodile? The owner? The state? And there is this horrific bureaucracy to get through. In the meantime, he is miraculously still alive in the crocodile and they ocassionally ask him to speak to see if he is still alive. The crocodile becomes more popular than ever before and people come from all over to hear the man speak from inside the crocodile. Eventually the man begins to believe that they are not coming for the oddity but because he really has something to say.

I see this story as a metaphor for media and politics. People often confuse access to the stage with having something to say. For some people, it can be a real trap. People are often in the positions they are in for many reasons apart from having any deep insights - they can be good at a dozen things and still not really be insightful people. They can be knowledgeable and have some good ideas, but lets have some humility! Maiamonides used to say "Teach thy tongue to say 'I do not know,' and thou shalt progress." In education, no one says "I do not know," they say "Good question! I would say that the cross modal affordances of the matrices of these pedogogical dispositions are quite problamatic at this stage and will require further inquiry and research." Let's not take one another so seriously: journals, blogs, conferences - whatever your media, it can be your crocodile! 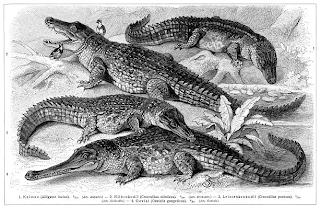