MOOCs and Other Four-Legged Chickens 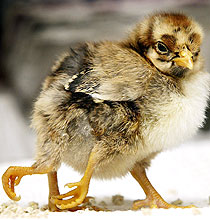 I have just moved to Humboldt State University. The college is fairly rural but we get a lot of folks from urban areas. I over heard a very interesting conversation between some students in the cafeteria.  One of them was freaking out because there was a rat in the garden outside that they could see outside through the window.
She yelled "what is that hopping around?"
One of her friends said "that has to be a bird."
She said "but it has four legs and a tail."
"But chickens have four legs," said the other, "that's what you get in the bucket." They went back and forth. The wood rat hopped away and her three friends went on debating the nature of birds and mammals.
You might wonder how someone could make such a mistake. But imagine if the only time you have ever really thought about chicken was when it was in a soup,  a sandwich or already in a bucket. If you order fried chicken, you can get a whole assortment of parts but it would be difficult to piece back together a whole bird.

MOOCs are going through what I am thinking of here as a "four-legged chicken" stage. There are a lot of educational experiences and platforms that are being described as MOOCs: there is the original "Connectivist" or networked based MOOCs, task-based MOOCs, and content-based MOOCs. Some even describe collections of videos as MOOCs. There are many variations. Because the MOOC acronym has the word "class" in it, many educators are expecting to see their own definition of a class which is often a face-to-face class or a "traditional" online class where they have the most control. When the description of the MOOC does not meet the definition of a class, the conclusion is that it will fail as an educational experience. Many of the arguments I have read against MOOCs will latch on to one aspect of the course or only look at one kind of MOOC and then condemn the whole idea. Many of the arguments are re-hashes of arguments against online learning that were already fought and won 15 years ago (i.e. "No Significant Difference," student identity issues, etc.). Online learning was the four-legged chicken of the 90s.

My take on MOOCs is that there needs to be more focus on how they work - this is the instructional design component. On one hand, we are early in the research, but MOOCs have been around since 2008. Most educators are just now hearing about them because, as Stephen Downes has also pointed out, they were only recently picked up by the big name universities which then attracts the attention of the Chronicle of Higher Ed, the Horizon Report, etc.

Recently an instructor created a MOOC that, for a number of reasons, failed. Of course that happened - this is a new teaching and learning environment. We are still learning how all the pieces fit together. Face-to-face and online classes have also failed. There are face-to-face colleges with worse retention and student success rates than some online colleges. This is not the "I told you so moment" that some think it is. I feel very strongly that we can't dismiss MOOCs because, in my experience, some of them work very well (George Siemens, Stephen Downes, and Jim Groom). The current state of the research is thin, we need more data, we need to work out the best practices. And in the end, you cannot assemble a chicken from a bucket of KFC,