Image via WikipediaI have been ranting all holiday about John Comenius' textbook, Orbis Pictus, from 1658. It is the first known illustrated text book for children. It has 240 short chapters with an illustration and text that corresponds to the picture with letters or numbers. I have been looking at the English translation by Hoole from the 1659 from Gutenberg's copy of the Orbis Pictus.

"Comenius advocated relating education to everyday life by emphasizing contact with objects in the environment and systematizing all knowledge. He did not regard religion and science as incompatible. Teaching was to be in the vernacular rather than in Latin, and languages were to be learned by the conversational method. He worked for a universal system of education offering equal opportunities to women." - The Free Dictionary

We are familiar with that teaching method in the K-12 schools where the instructor asks the students questions about a picture and the text gives the students the vocabulary and images to refer to and answer the questions. It is a very effective technique and it is amazing that with all of our technological advances this level of interaction is still missing from much of online learning (and our face-to-face classes!).

What is interesting about the book is the visual learning aspect and also the fact that it is a good review of Latin. It also provides interesting insights into the society and time that produced the book, and what Comenius' and educators must have thought of children and society. Each chapter gives a picture of some aspect of the world or a description of an occupation. The first chapters deal with creation and the natural world and moves on to farming, hunting, religion, etc. A student in the 1650s (and for nearly 200 years after) would be introduced to the world and society including "The tormenting of malefactors." The description of Islam is particularly interesting, but they sum up the religion of the Native Americans as devil worship. In 1727 the book was put into the two-column format with English and Latin.

"The most eminent educator of the seventeenth century, however, was John Amos Comenius . . . . . . His Orbis Sensualium Pictus, published in 1657, enjoyed a still higher renown. The text was much the same with the Janua [a text he also wrote], being intended as a kind of elementary encyclopædia; but it differed from all previous text-books, in being illustrated with pictures, on copper and wood, of the various topics discussed in it. This book was universally popular. In those portions of Germany where the schools had been broken up by the “Thirty years’ war,” mothers taught their children from its pages. Corrected and amended by later editors, it continued for nearly two hundred years, to be a text-book of the German schools." (History and Progress of Education, by Philobiblius, N.Y., 1860, p. 210.) The English translation was a standard textbook in English and American schools and Comenius was so respected as an educator that he was invited to become the president of Harvard. 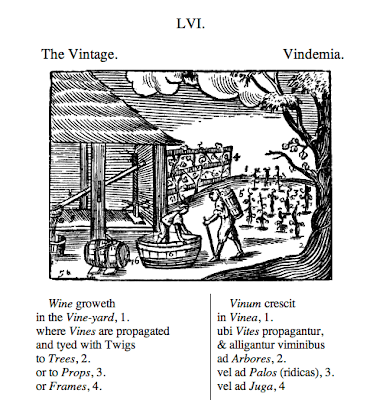