I have written a couple of postings discussing the idea that Connectivism isn't new (it is just highly relevant right now). There is an interesting note in USA Today by Elizabeth Weise on a project at Stanford called "The Republic of Letters" put together by Dan Edelstein and Paula Findlen that visually maps the networks of letter writers in the 18th century. The project graphically reveals the networks through dynamic animation. Oxford University supplied information on 50,000 letters (15,000 of them written by Voltaire). Today's social media is merely faster and cheaper.

Weise writes "The 18th century was alive with networks. Despite what some might think today, they weren’t invented when the first email was sent in 1971. 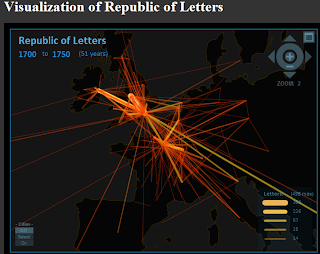 'In fact, going all the way back to the Renaissance, scholars have establish

ed themselves into networks in order to receive the latest news, find out the latest discoveries and circulate the ideas of others,' says Edelstein."

This project is a good example of cross discipline studies (History, French, and programming) helping us gain an understanding of where we are now and where we are going. Truly in the spirit of connective knowledge.