Networks in the Rear View Mirror "The past went that-a-way. When faced with a totally new situation, we tend always to attach ourselves to the objects, to the flavor of the most recent past. We look at the present through a rear view mirror. We march backwards into the future." - Marshall McLuhan

I loved the image that Jane Knight posted this month from Sean Carton. I linked it to the left. It is interesting to me because this is one of the few that acknowledges the inherent networked capacities in humans. The whole idea of writing arises from the desire to connect memory and ideas with other people, places, and the future. In a way, cuneiform libraries are networks because the information in them was meant to be copied, preserved, and sent to others. Carton's time line jumps from the 550 BC postal service in Persian straight to the telegraph in 1792. A nod should also be given to the East and the Silk Road as a network, especially since the Chinese found a 2000 year old letter in a post office adjoining the Silk Road. Again, I really appreciate the fact that he is giving us some idea of networks before 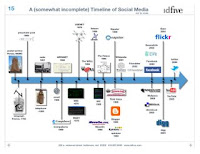 the 1960s but I think an important addition to this timeline would be the monastic system of the Middle Ages. Not just for the "look-at-me-I-was-a-humanities-major" bit, but because those monasteries were so successful at transmitting, preserving, and passing on information that we are still struggling in the shadows of those institutions today. They were really good at finding, copying, and preserving books. That is where a lot of the traditions in colleges come from. Students are taking notes in classes today because in the 12th century university, the only way to get a copy of the book that the instructor was reading from was to copy it yourself. McLuhan calls schools the "custodians of print culture."

Some of the great epics of the West open with guards waiting to see the fire from the next tower over or with runners and messengers delivering news. A great deal of exposition is given in letters in Shakespeare and later we also have epistolary novels where the movement of information can sometimes shape the plot. What I am trying to point out is that there has always been this awareness of connectedness and information. What is happening now is that we are learning how to mediate that seemingly overwhelming speed of that change and that mediation is changing the way we think.
Posted by Geoff Cain at 10/15/2009