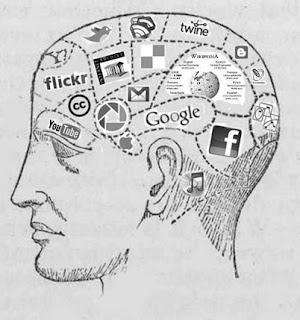 That question came up recently in conversation and I really resent it because after I tweeted the question, which automatically sent it to Facebook, that had my Blackberry buzzing away from friends who had forwarded the question to Friendfeed and Plurk; I realized that I really didn't have enough time to answer the question adequately. Some responses went into my Google Reader which upped my unread items by another dozen. Other responses were from friends who made films or podcasts of their take on the question. I did some research through Wikipedia and some of my contacts in Delicious Bookmarks which led to a long conference call via Skype with researchers in India and Scandinavia. Our conclusion after running a survey in Google Docs and conferring with some friends in LiveJournal was that we are probably not overly connected but we are holding off a final judgment until the images of our jointly edited concept map of the question are shared on Flickr, Twitpic, and Picasa.