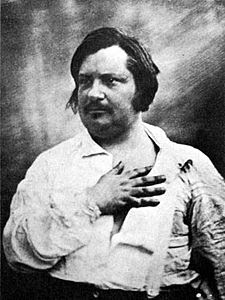 Mind and machine merge in the 1822 invention of the espresso machine. The machine age motorcycle of the mind. Is it a coincidence that from the belles lettres age of tea and lace that "Realism" bursts onto the scene at the same time with novelists like Balzac? Coffee is the lubricating oil of music, art, and other revolutions. The world was asleep and Balzac drank the blackest of coffee he could find and woke up. He saw the world for the first time with all of its many surfaces shining and reflecting into one another. Its darknesses darker, its light, a scintillating patina dancing over all. The City now breathes with life, every stone once a palace and now a future barricade; each man pushing a cart intertwined by history and economy into the lives of the least and the greatest.
Balzac would rise in the late afternoon like a tide, eat a light dinner, sleep until midnight, and then write and work for fourteen hours. His life, work, passions, and person were all colossal. I don't understand why critics call a man who believed in ghosts, the monarchy, and failed at every business venture a Realist. He reminds me at times of a child who won't go to bed when there is company over for fear that they will miss something. What did it mean when we could not put that book down when we were children? We knew that the book was not going to change over night, it would still be there, we could still continue it but we would rather spend the next day tired than put the book down. Balzac saw the world as a book he couldn't put down and set out to write about the whole thing. For this, he would need to stay awake. He wrote, published, and edited in all the media of his day: newspapers, magazines, books, plays, and an opera.

The history of coffee in the West follows the rise of industrialism. The early machines are still used and made today - things of steam, pistons, and springs that are works of art in themselves, The semi-automatic espresso machine was developed after World War II and the fully automatic espresso machine invented in the 1960s - coincidentally another time of social, political, and artistic revolutions.
I was asked a few weeks ago about how I reconcile work and art. How can we work in a college, write and research in education, teach and also write fiction or produce any art? I began to think about all the ways that my work informs my art and vice-versa. Balzac was in on the multimedia boom of his time, the modern printing press. He was a newpaper, magazine, and book publisher. He was not successful at any of these because he still had a huge foot in the previous century. We see ventures like this all the time today - internet ventures that act like paid subscription libraries in an age of open content. And I love the derision that is directed towards blogging in the "traditional" academic media (Chronicle of Higher Ed and New York Review of Books); they can't stand uncontrolled, non-tenured, non-vetted, non-peer-reviewed amateur scholars daring to publish. They should celebrate the return of the penny pamphlet - it is even cheaper now! The pamphleteers fed the imaginations of Shakespeare and Thomas Paine. Many of the world's greatest ideas came from the chemically-altered imaginations of the self-published. I like blogging because I can start a piece in the third person and end in the first and there is no one here to stop me.

I am no Balzac but his huge embrace of all media and forms of writing, his enormously polymathic output, is an inspiration. So my answer to the question about work and art in the Age of the 60 Hour Work Week is to love the world, live passionately, and be prepared to drink lots of coffee!
Posted by Geoff Cain at 11/14/2008